You are here: Home / Writing / Scratching the glass ceiling

Your starter for ten: name a top female conductor (no Googling please?)  That’s any Musical Director or conductor of the world’s top 15 orchestras?  After 2014’s Last Night of the Proms you might have heard the name Marin Alsop along with the  sound of a glass ceiling being scratched, if not shattered. 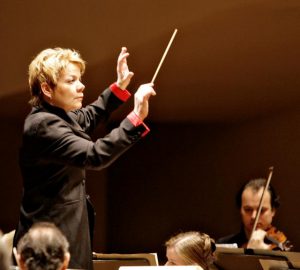 Seven years ago, Marin Alsop became the first woman ever to lead a major orchestra (the Baltimore Symphony.)  In her speech at the Proms she alluded to the gender inequality still prevalent not just in classical music but across many fields and remarked wryly, that she hoped the next female conductor at the Proms wouldn’t make headlines – like she did – simply because she was a woman.  It’s a very real possibility as attitudes appear to be changing.  Scandinavia and Asia still lead the way in the growing numbers of women studying to be conductors – Europe still lags a little behind.

After Marin Alsop scratched the glass ceiling of the musical establishment, others followed. 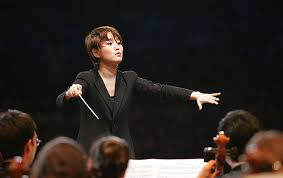 Here’s an article in the BBC Music Magazine which lists 11 of the top women conductors. It is by no means definitive. Here’s a few more in case you’d never heard of them: Jane Glover, Natalia Luis-Bassa, Eva Ollikainen, Julia Jones, Alice Farnham. And there’s more. Following a successful career as an international cellist, South Korea’s Han-Na Chang is now one of the brightest conducting talents, appointed Musical Director of the Qatar Philharmonic Orchestra and subsequently Principal Guest Conductor with the Trondheim Symfoniorkester. Mexico’s Alondra de la Parra described as “one of the most compelling conductors of her generation” is guest conductor of a number of world-class orchestras including the RSB Berlin Radio Orchestra, the Orchestre de Paris and the London Philharmonic Orchestra.   She also founded the Philharmonic Orchestra of the Americas.

Yet, as any one of these hugely talented conductors might have experienced, there are still great differences in how a man and a woman are perceived on the podium. There shouldn’t be but there are.  In 2013 Vasily Petrenko, the principal conductor of the Oslo Philharmonic and the Royal Liverpool Philharmonic, provoked outrage when he told the Norwegian newspaper Aftenposten that “orchestras react better when they have a man in front of them” because “a cute girl on the podium means that musicians think about other things.”  Following howls of protest from female conductors in Europe, he later clarified his comments saying he was referring only to orchestras in Russia (as if somehow that made his comments perfectly acceptable) and that his wife was a choral conductor.

Although the tradition-steeped world of classical music has made gains in gender parity, conducting still has plenty of catching up to do.  It’s often seen as one of the last glass ceilings in the music industry.  As Ewa Strusinska puts it: “female conductors are often seen as individuals doing men’s work.” Putting women on the podium may not be traditional, but if Marin Alsop’s Proms – which had a record number of sold-out performances and employed an unprecedented number of female conductors (5) – is any indication, that’s an innovation that audiences appreciate.