You are here: Home / Writing / “Gibraltarians have come into their own” – my article in the New Statesman. 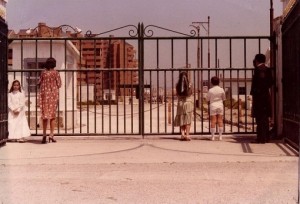 My favourite meal as a child growing up in Gibraltar was “tortilla de patatas” (Spanish, potato omelette) with a dollop of tomato ketchup and baked beans.  As an adult I’m still partial to this curious, Anglo-Spanish, culinary combination, which perfectly encapsulates the hybrid nature of the Gibraltarians.  Fiercely British with a strong, Mediterranean influence, all aspects of life on the Rock of Gibraltar – from the “llanito” mishmash of English and Spanish spoken everywhere to the local traditions and way of life – feel just as curious a mix as that plate of tortilla and baked beans.

It’s now more than 300 years since Spain lost the war of succession to an Anglo-Dutch force and signed the Treaty of Utrecht in 1713, which handed Britain the sovereignty of Gibraltar “in perpetuity.”  But it seems Spain has never really got over losing this rocky outcrop on its southernmost tip.  Unbelievably, most Spaniards I’ve met consider it a matter of national pride that Gibraltar should one day return to Spain.  Politely pointing out that the Rock and the Gibraltarians have been British for longer than the United States has been American, is not music to Spanish ears.

Gibraltar has been an intractable, stumbling block for countless Spanish and British governments, who’ve found their diplomatic skills tested to the limit in repeated attempts to solve their differences over this political hot potato.  Two significant players in the EU, in the world of realpolitik neither Madrid nor London want a historic spat over a territory little more than 2.5 square miles, to stand in the way of trade interests and political alliances in a global context.

The defining era in Gibraltar’s modern, political history began in 1969 when the Spanish dictator, General Francisco Franco, decided to close the border with Gibraltar.  In an added, cruel twist, all postal, telephone and maritime links with Gibraltar were severed as the Generalissimo hoped Gibraltar would “fall like an over-ripened fruit.”  But the Rock and its people had withstood long sieges throughout history and survived.  This was to be no different.

During the sixteen, long years that the frontier remained closed, a typical Sunday afternoon would usually involve a ride out in the family car, driving round and round the Rock’s narrow roads like a life-size Scalextrix.  We could only go as far as “la frontera” the border with Spain.  Some families would pitch up, sitting on fold-away chairs, chatting and having a picnic tea. I once spotted a neighbour knitting on a deckchair next to the padlocked gates.

About fifty metres away from us, stood my Spanish grandparents, aunt, uncle and two cousins.  Binoculars were essential and we’d communicate as best we could – by shouting loudly at each other across the empty space between the two locked gates.  Swapping snippets of news at the top of our voices, hoping they’d hear us.  Visiting family in Spain involved two ferries and two continents for a journey of less than two nautical miles.

The pain of years of enforced separation left its mark on Gibraltarian and Spanish families like mine.  There was anger, bitterness and suspicion of Spain and all things Spanish, after so many years of being cut off, with only a stick and no carrot from our neighbours to the north.  Gibraltarians came together, with a reinforced Britishness as a carapace.  Britain was the life-support machine that ensured Gibraltar survived this modern-day siege.  All supplies were flown from London and Morocco and the Spanish workforce that disappeared – literally overnight – was replaced by Moroccan labour.

I grew up happily watching Spanish and English TV programmes, laughing at English and Spanish jokes, eating turrón and mince pies at Christmas with that duality of culture that is so typically Gibraltarian.

We didn’t have a “National Day” when I was growing up.  Throughout the sixties and seventies Gibraltar was still unashamedly a British colony, before the word colony became politically unpalatable.  No-one seemed to mind then, it’s just the way things were.  A large proportion of the – admittedly not very big – territory was the sole preserve of the Ministry of Defence and therefore out of bounds for the locals

After Spain fully reopened its border with Gibraltar in 1985 – just before Spain joined the EU – it took a good 20 years for cross-border relations to thaw out.  Growing numbers of Gibraltarian families bought or rented Spanish property, a new generation socialised with their Spanish neighbours, trade links were renewed, thousands of Spanish workers found jobs in Gibraltar, couples from both sides of the border, fell in love and got married, just like my parents had done thirty years earlier.  As the two “sides” became closer, so did the politicians.  Tripartite talks between Spain, Britain and Gibraltar led to the “Cordoba Agreement” in 2006 establishing a forum for areas of cross-border co-operation.

Then last July, things suddenly went pear-shaped.  Almost overnight there were queues of up to seven hours to get in and out of Gibraltar.  This time the trigger was an artificial reef.  Spain objected to the Gibraltar Government’s decision to drop 70 concrete blocks in the sea near the isthmus to preserve marine stocks.  The Spanish fishermen, who frequently ventured into Gibraltar waters for their day’s catch, were not best pleased.  Spain, often accused of using the border with Gibraltar as a choke-hold, said the lengthy queues were a result of increased customs checks to prevent tobacco smuggling into Spain.

As the summer temperatures soared, so did the heated exchanges between Downing Street and La Moncloa with frequent salvos in yet another diplomatic war of words.

In a matter of weeks, the rapprochement built up by neighbouring communities in the last 25 years, quickly evaporated.  Animosity grew and Gibraltarians reported feeling unsafe and uncomfortable going to Spain after reports of vandalism to Gibraltarian cars parked on Spanish streets.  People chose not to go to Spain if they could avoid it and spent their money on the Rock.  The knock-on effect on neighbouring Spanish supermarkets and restaurants was quickly felt too, with as much as a 65% drop in takings.  Nine months on, the border queues remain and the political impasse shows no signs of being broken.

Regardless of the centuries-old wrangling over sovereignty with Spain, Gibraltar is now more than ever the Rock of the Gibraltarians.  A British Overseas Territory with a population of thirty thousand who’ve matured as a people with a very clearly defined sense of cultural identity and purpose.  Nowhere is this more palpable than on National Day, September 10th, when the red and white Gibraltar flag with the emblematic castle and keys, is everywhere and llanitos take to the streets in a sea of red and white to celebrate their coming of age as a people.  This nationalism, underpinned by a new constitution in 2007, has gained a momentum all of its own, free from the mental shackles of colonialism.

Key to this has been the diversification of Gibraltar’s economy from a heavy dependence on the British military (once the largest local employer alongside the civil service) towards new business sectors  such as – online gaming, bunkering, tourism, all bringing jobs and wealth creation to the Rock.  The highly-regulated, finance centre has flourished and is now one of the central pillars of a healthy economy that grew 8% last year with a low unemployment rate – around 2% – that’s the envy of other crisis-ridden economies in Europe.

This burgeoning nationalism was cemented in the years following the 2002 referendum on joint sovereignty proposals by the Blair government when 98% of Gibraltar’s population voted to remain British.  Sharing sovereignty with Spain?  British Gibraltarians were never going to buy that and the proposals were kicked into the long grass.

In the twenty-three years I’ve lived away from my homeland, Gibraltarians have come into their own, confidently punching above their weight for such a tiny dot on the world map.  Last year they celebrated a long-held dream to join the UEFA family.

In a promotional video for the UEFA campaign, Gibraltar’s Chief Minister, Fabian Picardo, described the Rock’s future as “red, white and proud, red, white and free.”  I sincerely hope that my fellow “llanitos” can confidently face their neighbours to the north and celebrate the richness and diversity of their own cultural heritage.  It’s what makes the Gibraltarians such a unique, Anglo-Spanish hybrid, pretty much like the tortilla and baked beans that I now feed my bilingual children every so often.