Music is a truly universal language that brings people and cultures together in a way nothing else can.  The power of music to stir the emotions, feed the soul, bring a tear to the eye, never ceases to amaze me.  So it was when I heard this performance of the “Ave Maria” written by the late, Gibraltarian guitarist and composer, William Gomez.

For being such a tiny place, Gibraltar certainly knows how to produce some musical talent, and (if you believe in coincidences,) I learnt that the day I first wrote this piece, (2nd December) was on the anniversary of William Gomez’s passing.   He was a man of extraordinary musical ability as a classical guitarist but also a talented performer in local drama festivals, where he won several “Best Actor” and “Best Producer” awards. William also happened to be my guitar teacher from the age of 7.  As a young child, struggling to get my fingers to stretch to the right fret, he was extraordinarily patient even when I hadn’t done as much guitar practice as I should have. 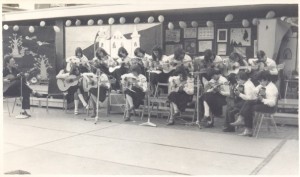 Despite having a child’s limited knowledge of the world, I could sense even then that I was in the presence of someone special, one of life’s “greats,” as my father once described him.

Gomez studied the guitar from an early age and then, on the recommendation of maestro Narciso Yepes, completed his studies in Madrid with Professor Quintín Esquembre.

His fledgling career in Spain was truncated by various setbacks, among them the political antagonism towards Gibraltarians in the sixties, when General Franco’s regime was at its most virulent towards British Gibraltar.  This fraught political climate in Spain culminated with the closure of the border with Gibraltar for 16 years.

A move to London followed where a promising career as a concert guitarist beckoned. William played at all the well-known, classical music venues including Cadogan Hall and the Royal Festival Hall.  His sister Carmen Gomez wrote in her book, ‘Memories Bound up in Life,’ that William quickly felt lonely and homesick in London.

He returned to Gibraltar and took up a music teaching post in the Girls’ Comprehensive School (now Westside School.) William soon got involved in the Music Centre hub and multiple music projects with conductor and musician, Hector Cortes.

As anyone who’s ever worked with William can attest, his creativity, strong personality, and volatile temper were offset by a great sense of humour, charm and a ready laugh. Always the perfectionist, he expected the very best from his players.  It can’t have been easy for a man of his virtuoso talent to be entirely fulfilled by life as a music teacher.

Then in the late eighties and early nineties, success came with William’s ensemble “Vibrations,’ who toured throughout the UK with Shirley Bassey, played with George Benson and recorded a hit CD.  There were numerous appearances on BBC television and radio.  All this while continuing to perform at numerous concerts on the Rock, including an unforgettable evening with the top Spanish, flamenco guitarist, Paco de Lucia.

His influence on music in Gibraltar over the last forty years has been immense and his legacy lives on – in a new generation of musical talent.  The classical conductor Karel Chichon, pianist Aaron Monteverde, tenor Nathan Payas, classical guitarists Charles Ramirez and Judah Bensadon and Simon Dumas who sings lead vocals, and plays acoustic guitar and keyboard with the US band, King Calaway.

Around five years ago, I was watching a classical guitarist, John Rattenbury in London. His repertoire included some pieces that I’d heard William Gomez perform often.  As I queued up after the concert to buy his CD, I mentioned to Rattenbury that his playing reminded me of my former teacher, William Gomez.  He paused for a second, “I’ve heard of him, I know the name.  Narciso Yepes spoke very highly of him.”

William would have loved that.

Here’s some links to William Gomez playing (with thanks to Judah Bensadon, a brilliant guitarist and former pupil of William Gomez.)