You are here: Home / Writing / Everyone lost and saved 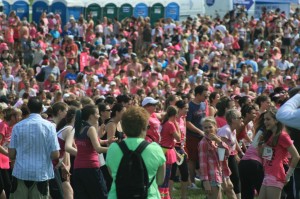 The four words said it all.  They were on a card stuck to the back of the runner in front of me.  “I am running the Race for Life for…everyone lost and saved.”  There were many similar messages on the backs of the thousands who gathered at Epsom Downs on this gloriously sunny and warm, Sunday morning.  All doing their bit to raise money for Cancer Research so that, as the charity’s slogan said, “we can kick cancer’s butt.”  I was running my first charity race with a group of Mums from my son’s primary school. 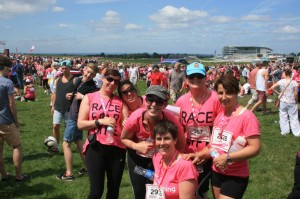 Group of St Joseph’s Mums after finishing the race.

We’d been supporting each other with tips and advice on training in the months prior to the race and there we all were on the big day, amid the sea of pink t-shirts, with our numbers proudly displayed on the front and our “speech bubble” cards on the back.  Names of loved ones who’d lost the fight against cancer, names of people still battling the disease, messages of solidarity with all those touched by “the big C” in some way or other.  Messages that showed they were in the thoughts of the 18,000 runners and walkers taking part in Race for Life at Epsom.  There was a lively, carnival atmosphere during the energetic, warm-up in the hour before the race started.  Amid the excited crowds I also spotted the odd, poignant moment of quiet contemplation – a silent, emotional hug here, a clasped hand of support there, countless photos pinned onto t-shirts, that spoke volumes.  We were all there to run the good race in support of a good cause.  As we sped off from the starting line I was surprised at how emotional I felt to be jogging along with all those thousands 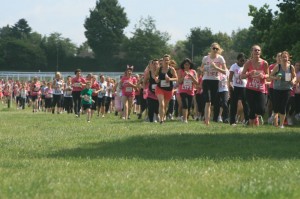 Thousands of women and some children running together in support of Cancer Research.

of women past thousands of supporters who lined the route, hands raised, clapping and cheering us on.  “There lies true empathy,” I thought to myself as I tackled the first of many steep climbs on the five-kilometres course.  At the finishing line, hugs, tears, smiles, laughter, more water bottles and an enormous sense of achievement at having contributed to the efforts of so many in finding a cure for “the Big C.”  I’m sure almost everyone who took part will be back again next year – I know I will.