You are here: Home / Writing / The Iron Lady 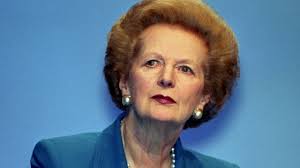 her death.  Baroness Thatcher, Margaret Thatcher, Maggie Thatcher, the Iron Lady, whatever your preferred moniker, the mere mention of her name invariably got a reaction.

I deliberately chose not to write about her during the immediate aftermath of her passing, for fear the acres of newsprint and hours of airtime devoted to the story might end up sledgehammering this writer’s thoughts on the subject.  Time for reflection is a luxury most journalists don’t have in the race to beat a deadline.  On this story, the deadlines have been and gone and after some reflection, a time to distil the essence of Margaret Thatcher.  She was one of few public figures whose ideology spawned an “ism.”  Thus Thatcherism has entered the lexicon of all who read, speak and write about her.  Her single-minded determination to overcome any obstacles on the rise to the top is now the stuff of political legend.  She stood alone for much of her political and personal life, particularly since she was widowed.

Despite all her mighty, political ideals and achievements, whether you admired or detested her, it’s hard not to feel sorry for a woman who died alone, in a hotel, with just a nurse and a doctor in attendance.